Integration with MRI and fMRI

Both for developing and evaluating dipole source models of EEG or MEG activity, it is useful to have access to structural MRI or fMRI data.

The BESA MRI software allows to preprocess structural MRI data so that the individual anatomical information contained in the MRI can be utilized in BESA Research.

The chapters below describe the steps necessary to integrate the MRI and fMRI data with BESA Research.

It is also possible to use BESA Research with BrainVoyager. Detailed instructions on (f)MRI import and processing in Brain Voyager is provided by the BrainVoyager Getting Started Guide that can be downloaded from the Brain Innovation website: BrainVoyager Downloads.

How Coregistration is done

The steps you have to take (once for each data set):

Alignment of BESA and MRICoordinate Systems

The dialog is opened either from the Channel and digitized head surface point information (Ctrl-L) dialog by pressing the Edit/Coreg button, or from the main menu ("File/MRI Coregistration...").

Note: If the coregistration dialog is invoked from an EEG data set in which no digitized electrode coordinates are available (i.e. standard electrode positions located on a sphere are assumed), BESA Research presents a warning message, saying that for MRI coregistration realistic electrode coordinates produce better results. BESA Research has a list of such realistic standard coordinates (i.e. located on a pre-defined standard head surface) for various electrodes available in file Default.sfp, which is located in the Standard Electrode folder. If all electrodes in the dataset are listed in this file, a dialog window suggests to apply this file to the current data set, i.e. to switch from standard sphere coordinates to the standard realistic electrode coordinates in file Default.sfp. If the suggestion is accepted, default.sfp is assigned to the dataset (see Channel and digitized head surface point information (Ctrl-L) dialog). 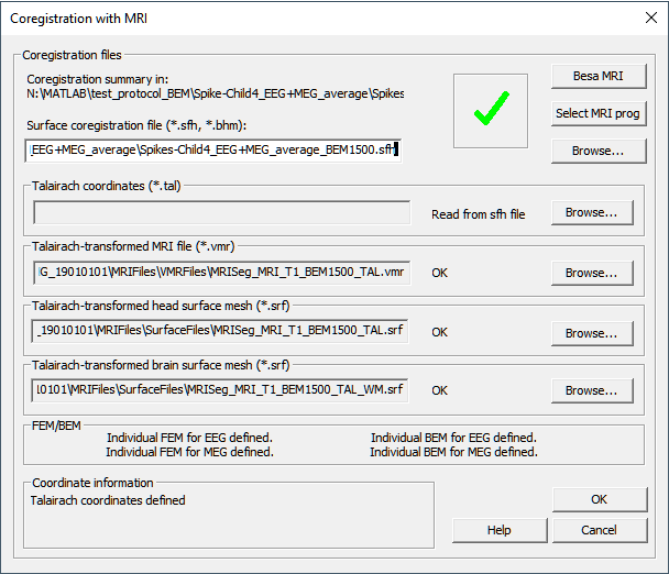 If you follow the naming conventions for file names as described here, BESA Research detects the file names it requires, and the Coregistration Dialog is filled in automatically.

How to Generate a Brain Surface Mesh

BESA Research is able to compute surface images, such as (Cortical LORETA, Cortical CLARA, Minimum Norm) using an individual cortex surface as the source space. A suitable cortex surface for this purpose can be effortlessly created using BESA MRI. Alternatively, BrainVoyager can be used for the creation of the brain surface mesh.

It is assumed that you know how to load an MRI as a 3D data set into BrainVoyagerQX, and how to clean the image so that regions outside the head are black. We also assume knowledge of how to create AC-PC-aligned and Talairach-transformed MRIs.

Note: if you have defined your fiducials differently in your BESA Research data (e.g. ear holes), click on the corresponding points in the MRI. If you have additional head surface points (step 8), accuracy in pinpointing the fiducials is not critical.

If you do not see the right half of the dialog, press the Advanced >> button.

BrainVoyager fits the points to the head, stretching x, y, and z coordinates to obtain a better fit than before.

The alignment steps need only be performed once for a given MRI and EEG/MEG data set. Otherwise, after starting BrainVoyager, just load the MRI, the surface mesh, and the surface points (see How to Set Up Coregistration with BrainVoyager after Alignment has been Done). Now the following actions are possible: see chapters

Co-locating Sources and MRI in the BESA Research Source Module

If the alignment procedure using BESA MRI (or BrainVoyager) has been completed then you can load the individual structural MRI in the Source Module by pressing 'A' or using a mouse right click and selecting Display MRI.

Sources in the current model are then overlayed onto the individual MRI.

Discrete sources can be also seeded from distributed source analysis result or from overlaid fMRI data.

Discrete solution can be also send directly to BESA MRI.

The current discrete solution (sources - dipoles) can be exported to BESA MRI (version 3.0 and above). It can be done in two ways:

The first option is only available if data is coregistered. Please note that in this scenario also confidence limits will be exported.

The second option can be used in all cases, but then the confidence limits will be not visible.

When Save Solution for BESA MRI is pressed the file is saved in the subject's MRI data folder. Afterwards, when the subject's MRI segmentation project is opened, the button Load Solution can be pressed. The solution that was exported is already preselected. After pressing OK, the solution will be loaded. Note that the solution is automatically transformed to ACPC coordinates if required (depending on the display in BESA MRI). 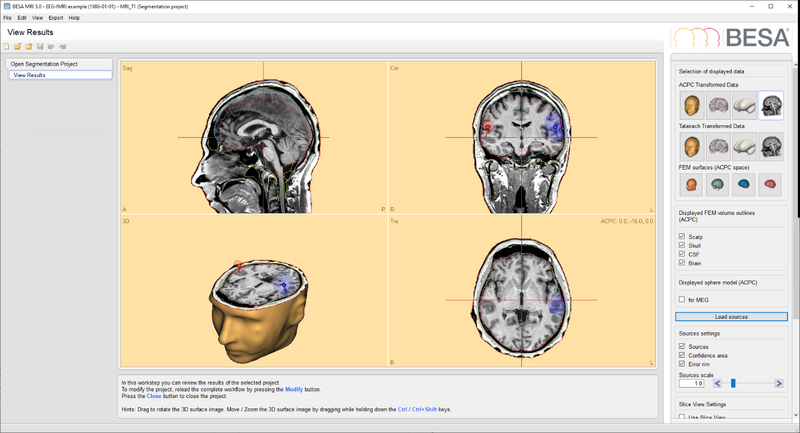 Coregistration with BrainVoyager after Alignment has been Done

BrainVoyager is now ready for Co-location.

This file is used to mediate between BESA Research and BESA MRI (or BrainVoyager(QX)). When it is first written by BESA Research, it contains a list of the digitized head surface points (fiducials, electrodes, other digitized points), e.g.

Each line contains a label, the coordinates in the Head Coordinate system, and parameters specifying the size and color of the sensor or head surface point as displayed in BESA MRI (or BrainVoyager).

Note: Older versions of BrainVoyager.exe do not append the lines starting with "Volume". In addition, the Talairach coordinates (starting at "AC: ...") are not appended if they were not loaded in BrainVoyagerQX.

Finally, when the Coregistration Dialog in BESA Research has found the Talairach MRI and surface meshes, and you press the OK button, BESA Research appends the additional file names:

In order to define the surface mesh, a clear contrast between the head surface and the outside of the head (T1-weighting) is required. Noise and measurement artifacts can influence the representation of the scalp surface. When doing the coregistration in BrainVoyager improvements in noisy images often can be achieved by cleaning up the image after first reading it using the tools provided by BrainVoyager.

We recommend several (30 or more) digitized head surface points in addition to the fiducials, including points on the nose (nose tip and sides). These points may include electrodes. In the case of electrodes, it is important to measure the distance from the scalp to the digitization point, i.e. the electrode thickness.