The principles of the artifact correction procedure are described in Berg and Scherg (1994).

In summary, the following steps are required:

Pattern search for blinks and EKG

Note that instead of SAW the SAV can be displayed (Search/Average/View). This interaction has exactly the same meaning as SAW but does not prompt for saving averaged data but just display it in the average buffer. This behaviour can be switched in Search Menu by checking Search, Average, View option

What to do if there is no VEOG or EKG channel

The procedure is similar to the above, but you need to identify a MEG channel that displays the blink or EKG waveform clearly. You may need to experiment with filter settings to make the artifact pattern clearer (the filter settings described above are not fixed rules – you may find that other settings work better for pattern search). You may find the “Create Triggers from EMG/EEG” tool helpful for detecting EKG (ERP/Create Triggers from EMG/EEG…). See the BESA help file (tutorial on creating triggers).

Spatial PCA and the *.atf file

Open the file in which you saved the averages (e.g. name_artifact.fsg). Make sure that prestimulus baseline correction is switched on (Filters/Use Prestimulus Baseline).

EKG coefficients are corrected analogously to blinks. A difference is that the topographic distribution of the EKG over the MEG sensors is more complex than that of blinks. It changes over time. The reasons for this are unclear, and may be due to movement of the heart (and its equivalent dipoles) over time, but also to ballistic effects: movement of the head due to blood flow.

Since topographic distribution changes over time, more than one component is required for correction. We choose the number of components in the Artifact Select Dialog Box empirically: As a rule of thumb, if a component explains more than 5-10% of the variance of the averaged EKG signal, the component is included. Note that the number of components you select can also be changed when the coefficients are applied to the raw data.

When you press the Average button, a warning dialog will appear:

You can leave artifact correction on during data averaging but it is not recommended.

Option “No” – leave artifact correction on

The averaged data will be corrected. Since this operation cannot be reverted without recreating the average. Each epoch is corrected before being included in the average.

The result of the correction on the raw data or the averaged data can be slightly different. The effects of correction will also vary, depending on the settings in Artifact/Options. These differences can be considered as consequences of variations in the “surrogate” or “adaptive” model of brain activity concurrent with the artifact activity (cf. Berg & Scherg 1994). These differences lead to changes in the estimate of the amounts of artifact activity to be removed by correction. If you intend to use the data waveforms outside BESA, and if you don’t use SSP with the artifact coefficients, then the settings in Artifact/Options become important. In current versions of BESA, these settings are based on EEG amplitude levels. 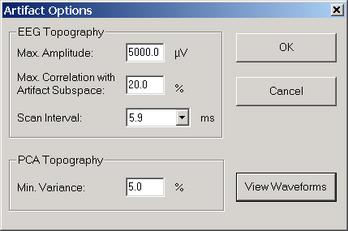 Sending the data to Source Analysis

When the average is generated, the correction coefficients are saved in the *.fsg file. Before you send the data to the Source Module, these coefficients must be activated.

Then mark a time range and send the data to Source Analysis. At the right of the status bar, the text ART indicates that the artifact components are used in SSP.

Alternatively, if you averaged the uncorrected data, load the average to Source Analysis, and then load the artifact coefficients as part of the dipole model (load or append solution, and use the dropdown list in the File Open box to select *.atf instead of *.bsa). This approach has the advantage that the source waveforms of the spatial components show the contribution of eye and EKG activity to the model.

This implicit application of artifact topographies during Source Analysis is mathematically equivalent to the “optimizing” correction method (cf. Berg & Scherg 1994)

Limitations of the correction method in BESA

The *.atf file contains a two-line header with a) the number of channels, and b) the channel labels. If these do not match with the current data file, artifact correction is not possible. Bad channels are marked (with an asterisk next to the label), and the corresponding coefficient is set to zero. The irritating, but logical, consequence is that if a channel was excluded (defined as “bad”) when the coefficients were generated, it is not possible to make the channel “good” again.