BESA Research includes a sophisticated spatial filtering method to detect and correct artifacts. The method can be applied to any kind of artifact including EOG and EKG artifacts. Spatial topographies describing the artifacts may be defined manually or by allowing the program to scan the data automatically. Manual definition can be accomplished by marking a time range containing the artifact or a buffer with the averaged artifact. In particular, EKG artifacts should be averaged before defining the spatial topography. Once defined, the corrected data waveforms can be displayed, together with additional channels below the current montage showing the time course of the artifacts. Spatial artifact topographies can be saved to a file (*.atf), and may be recalled for later use with the same data or other data from the same subject.

Automatic artifact correction is described in the chapter Automatic Correction below. For a tutorial on using calibration data for an accurate estimation of artifact coefficients, see help chapter "Artifact Correction / Tutorial".

Artifact correction is based on the spatial components method for correcting eye artifacts (Berg and Scherg 1994, see also Ille et al. 1997, 2002). Artifact and brain signal subspaces are described in terms of spatial topographies. The correction process consists of four steps:

BESA Research allows artifact correction to be done in different ways. The method you choose depends on how you want to analyze your data. The methods vary in how the data is distorted by correction, and how the brain activity is modeled for the estimation of eye activity:

Artifact correction can distort the data topographies and reduce or augment activities at some scalp regions, e.g. frontal scalp after eye movement correction. Therefore, maps should be interpreted with caution.

The advantage of the methods used in BESA Research over traditional approaches is that overlapping contributions of the artifacts and the EEG are separated as much as possible. In traditional approaches, a proportion of the signal on an EOG channel is always subtracted from each EEG signal. Thus, in contrast to traditional methods, the topography of the EEG is less distorted by correction based on spatial components, even if the correlation between artifact and brain activity is high.

Source Analysis takes distortion due to artifact correction into account

However much the signals may be distorted by artifact correction, the distortion can be taken into account in Source Analysis. This is accomplished using signal subspace projection (SSP, cf. Uusitalo et al. 1997), which is equivalent to the "optimizing" correction method described in Berg and Scherg (1994).

SSP is switched on in Source Analysis:

In the Review Window use the Artifact menu (Alt+A) to: 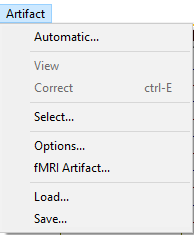 It is often desirable to use real data topographies for artifact correction, since they reflect the individual variability, e.g. in eye artifacts. The easiest way to assign an individual topography is to mark a data block which contains an artifact, and define the topography via the right click popup menu. The proceeding is as follows:

EEG data after a topography has been assigned to the category "Blink". A map of the topography is shown at the right. An additional channel for the blink artifact is introduced at the bottom, and data are corrected automatically.

Note that the data are automatically corrected, and an additional virtual artifact channel appears at the bottom. To switch correction off again, use the menu item Artifact / Correct which toggles correction.

Averaging over an artifact

This starts an automatic average of all matching patterns in the data file. You may stop the search after a number of events were found (progress is shown in the status bar; stop averaging with the ESC key). When asked for a filename to save the pattern, press Cancel. The averaged data buffer containing the artifact is shown. Now use the averaged artifact to define the artifact topography as described above for the blink artifact. When selecting the artifact category, choose EKG:

More information on artifact correction is given in the help chapter "Artifact Correction / Tutorial".

Please use only EEG hardware that is certified for MRI!

When EEG data is recorded during an fMRI session there are plenty problems to solve to be able to analyze the real brain signal The first one is related to fast switching of MRI gradient coils which is a part of volume acquisition in the Echo-Planar sequence used for fMRI imaging This switching introduces variable magnetic fields that induce variable electrical fields in the EEG recording system (electrodes and wires namely), as described by Maxwell’s second law The induced artifact is typically very large in amplitude (typically 16 mV in a 3.0 T MR scanner). Also, the frequency range of the artifact starts in the frequency band of the EEG signal The artifact frequency and its harmonics can be easily assessed using the following equation (Rusiniak et al, 2013b):

where fx is the harmonic frequency, x is the harmonic number, NS represents the number of slices, and TR stands for Repetition Time of fMRI volume acquisition. From a variety of methods, the most relevant successful and best known are those based on moving average subtraction as firstly introduces by Allen and colleagues (2000). These methods work only when the following assumptions are true: 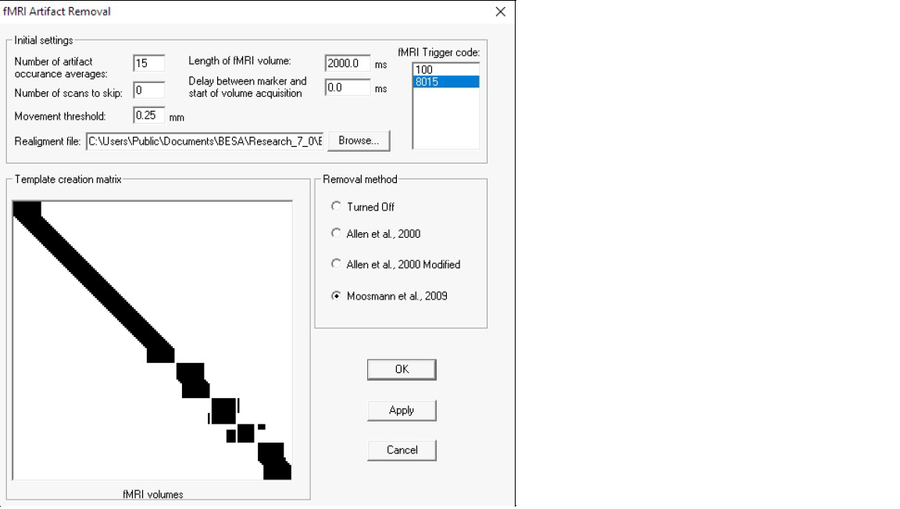 This method is a starting point for the two other methods as well In all methods a moving average artifact subtraction is used and the difference between methods can be noted in the template creation matrix To obtain artifact clean data (C) at epoch n the artifact template (B) has to be subtracted from artifact contaminated data (A) The mathematical principle for creating an artifact template at n-th epoch (Bn) is: 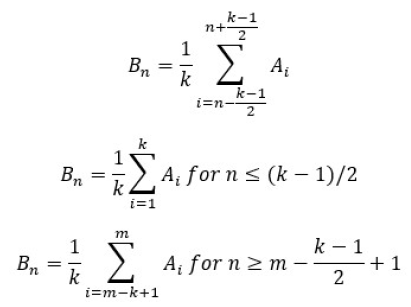 This procedure can be explained visually: 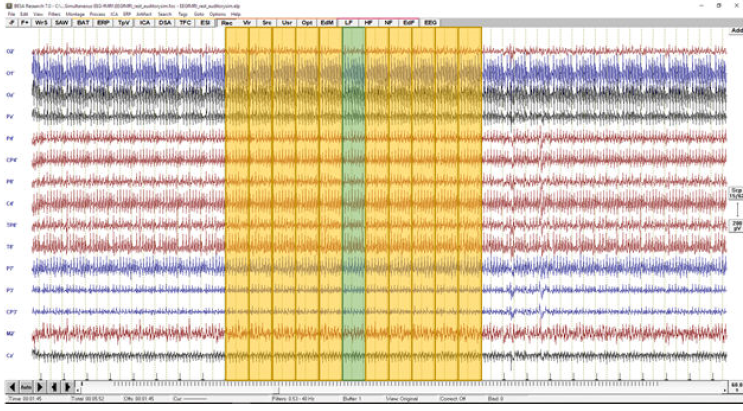 To clean the epoch indicated by the green shaded box the surrounding epochs have to be averaged first (here the averaging constant is k=10) After the template is created, it is subtracted from the recorded data at each channel independently to obtain artifact free data Next, this procedure is repeated for every epoch related to fMRI acquisition as indicated in the template creation matrix: 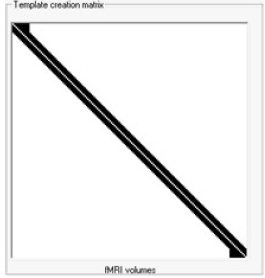 Note how the template changes when the number of artifact occurrence used for averaging is increased to k=30: 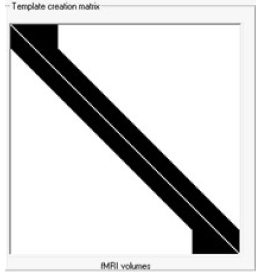 This method is available only if a correctly configured realignment file is provided Also, the changes in filtration will be visible if there is significant movement in the data (a recommended value for the movement threshold is 0.3 mm) In the modified Allen method, the epochs where subject’s movement is exceeding the threshold are ignored during artifact template creation, as shown in the template creation matrix below Note the vertical white lines – they represent the moments were movement was higher than threshold The data will be filtered but less artifact occurrences will be used for template creation close to a movement area. 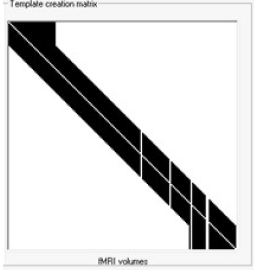 As with the modified Allen method, this method (Moosmann et al, 2009) is also available only if a correctly configured realignment file is provided. The adjustment of the template creation matrix is much more advanced and can be explained by the following equation 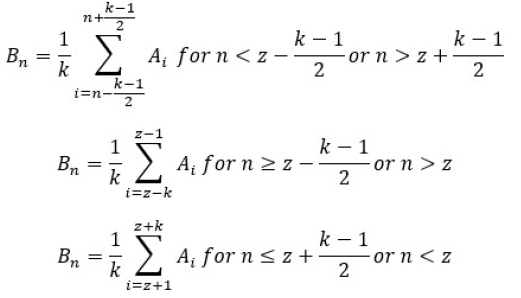 , where all parameters are defined as above and z means an epoch number where movement exceeds the threshold This operation results in the following template creation matrix: 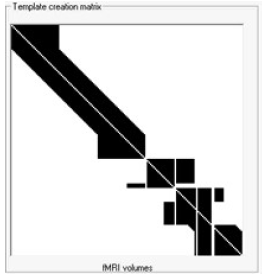 Note that this operation results in a different shape of matrix Importantly there are also white vertical lines This indicates that there was more than one epoch contaminated with movement In such situations, the matrix is transformed to adjust to fit to the largest movements, and smaller movements are treated as in Allen et al, 2000 Modified method.

Please keep in mind that simultaneous EEG-fMRI recording is a difficult yet powerful technique Following these rules could help one to perform a successful experiment:

After removing the fMRI gradient artifact many different steps can be performed (Abreu et al, 2018) For ECG induced artifacts (balistocardiogram) we recommend artifact correction using defined topographies for correction (usually with more than 3 components to filter).

In this example, we will work on calibration data containing systematic eye movements:

The data example, Examples\Xtras\Eye Artifacts\calibration.foc, was collected using 64 channels referred to Cz. In the eye movement calibration procedure, the subject watched a fixation point on a video monitor. At intervals of 2 s, an arrow appeared on the screen. The subject was instructed to move his eyes in the direction of the arrow to a point (marked on the wall of the shielded cabin) approximately 15° away from the fixation point, and then back to the fixation point. The subject was also instructed to try not to blink during the eye movement, but was allowed to blink while watching the fixation point. There were 20 movements in each of the directions left, right, up, down. Following these movements, the arrows were replaced by an image of an eye. This was a cue to blink. 20 eyeblinks were requested.

In the data file, trigger 1 denotes the horizontal arrows, trigger 2 the vertical arrows, and trigger 3 the eyeblinks.

Step 1: Setting up the parameters

Note that the signal is always positive (red on the map) in the direction of the movement. (Note that older versions of calibration.foc contain three trigger codes: 1=horizontal, 2=vertical, 3=blink. The newer version contains five codes: 1=left, 2=right, 3=up, 4=down, 5=blink.)

Note that correction is not perfect! In particular, some artifact signal will remain on electrodes near the eyes, e.g. E5, E14. In practice, this "imperfection" is not critical: most saccades are smaller than 15°, and blinks are usually corrected very well.

Comments on the procedure